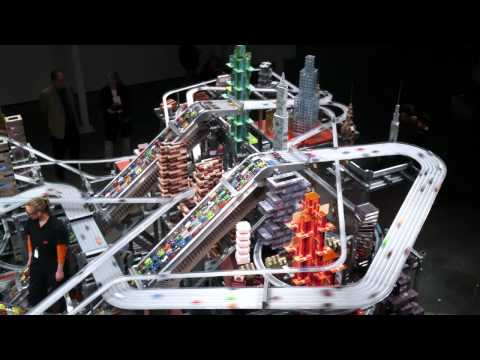 Metropolis II by Chris Burden is one kinetic sculpture representing the city like a car at the LACMA museum in Los Angeles. It took seven years of work to finance the artist’s project but from 14 January it is possible to admire what at first sight many visitors mistake for the track for the cars they have always dreamed of. In reality it is an inspired vision, a reflection on the speed of the modern city that sees the future of a mechanized as well as a regulated urban planning. Thus, it appears that instead of mass production and component standardization this artist sees the future of California (and the world) in automated highways.

Burden says it is a manifesto of ‘a future full of hope’ even if it is easy to imagine oneself in an environment like the one represented, at the intersection, stuck in traffic, prisoners of pollution. Made steel and electrical cables, Metropolis II is made up of skyscrapers, hills with moving walkways, elevated roads, railways, 6-lane highways and hundreds of buildings.

In metropolitan landscape in miniature thought by Burden, 1,100 mini vehicles travel at a speed (to scale) equal to 240 miles per hour, in constant motion: it is as if 100 thousand cars circulate inside every hour, metropolis numbers for an exhibition that already attracts many curious visitors.

The intent of the author of Metropolis II is to evoke in the visitors of the museum recently signed by the Italian star architect Renzo Piano, the energy that feeds the city, according to a poetic and extremely positive reflection.

Straw by Brem: the radiator with a sparkling design